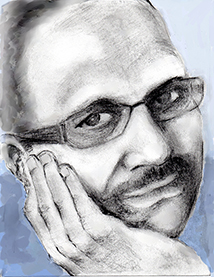 As someone famous said, “While drawing I discover what I really want to say.” I’ve tried in my own way to speak about beauty and character through sketches and paintings, many of them of places I have visited or longed to see, people I have revered or loved or simply images I have found striking. Here are some examples. If you like what you see, I could even draw a portrait for you, maybe of a pet or loved one, something that might capture a moment you cherish. Take a look.

Accomplished editor/illustrator with a strong track record on breaking news, making front-page decisions on the fly. Published illustrator with certificate in digital design. Outstanding background and experience with magazines and dailies in India and the U.S. Active in social networking. Prolific coverage of United Nations, and community stories in New York. Reuter/John S. Knight Fellowship at Stanford University and a Dag Hammarskjold Scholarship at U.N.

Desi Talk, a free newspaper for South Asians in the tristate area.